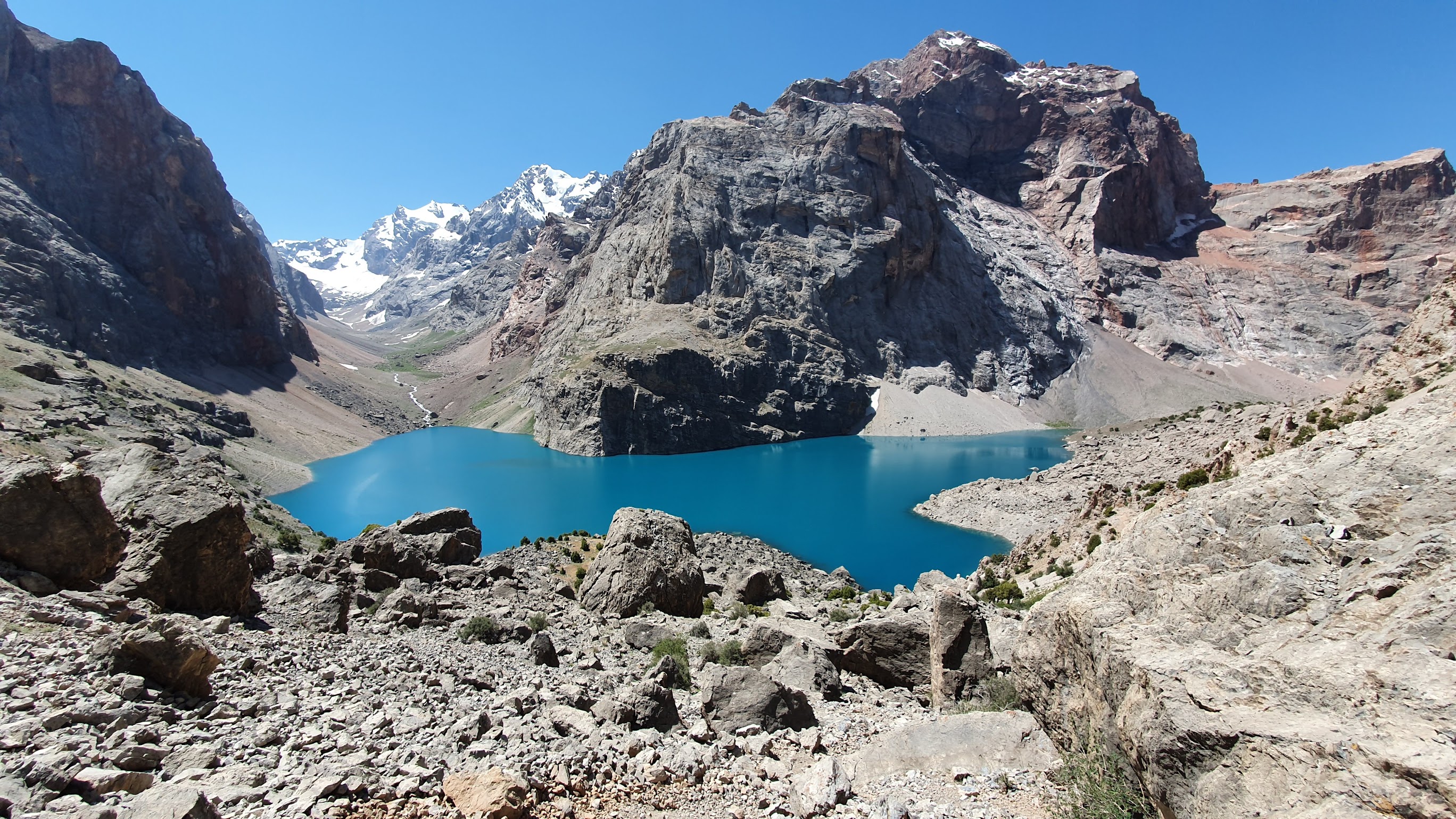 25.7 - We were just 8 kilometers away from the Big Alo lake. We started early as usuall to reach the lake by noon. There were only two tents above us. More hikers came the next day. All people we met continued down the valley back to the civilization.

26.7 - We rested for a day here. We enjoyed water, sun. The plan was to move to Smaller Alo later in the evening. We were wondering where is the hiking path on the left side of the lake. The path is visible but only partly. It disappears where is rocky terrain. We started moving later in the afternoon. The path definitely ended and we had to find our way. Bit of scrambling, jumping and we were on the other side of the lake. It was slightly challenging with backpack sometimes to get up and down. The rock was loose, we were couple of meters above the lake with heavy backpacks. We noticed couple of rock statues but that was it, no hiking path to follow. We camped above the lake. As there was not any good camping spot around the lake for all of us.

27.7 - Our target is to get through Dvoynoy pass. There were couple of passes on the left side where we wanted to go. We initially wanted to go to a closer saddle but we realized early enough it is not Dvoynoy and we need to go further up the valley. The snow started 500 meters above us. The path to the saddle was completely snow covered. It took us 5 hours to get to the saddle. The views beautiful. As any other day here. The Biryuzovoe lake was still under snow. Our proposed plan was to sleep at this lake. But once we saw it from Energia few days back, we knew we won’t sleep there as there is still too much snow. The way down was much easier, snow was melting and was quite stable, neither deep. As we descended couple of hundreds meters, the rocky terrain started again. There was path sometimes. We were just going down as fast as we can. Once we reached the valley, we noticed goats and sheep. There were local shepherds. They were very friendly and invited us for tee. We had wonderful tee break. The eldest could speak Russian. They even shared their food. We were nicely suprised and offered them our sweets.

We were back on feet and continued descending. We got to the river. There were two bridges to cross and one river crossing was just big rocks. We had to go around as there was no passage along the river. We went again up to meadows. We were already tired and were looking forward to dinner. We reached a camp site place in the evening. There was nothing solid earlier. This was our longest hike (entire day on foot, 10 hours moving time). We were very happy to be camping and get some rest overnight.

28.7 - Iskanderkul time! This was definitely not easy as I pictured it. There were few challenging spots along the way. First, the trail is above the river, steep terraing to cross. There were soil/rock slides that destroyed the trail. It was quite narrow or sometimes we were creating our own path. Second, the damaged bridge. Check the picture below. It was reported few years back in russian trip reports. The wild river below us and in front of us - few trees tied together with large spaces between. Trees were wet, one was even broken. Fortunately, We managed to pass without any issues. The surprising moment for us was when we saw a man on another side of the river. There was no path there, we could see how difficult it is to make one step for him. He was far away from us to talk to him. He might have wanted to avoid crossing the bridge, who knows. But from our perspective, the terrain was very difficult and he was quite high. Any mistake there might lead to sliding dozen of meters down to the river.

We saw man-made buildings in the afternoon, civilization! We were day-dreaming about beer and food as we realized we will be soon enough in Iskanderkul. The first people we met were “doctors without borders”. One of them was Slovak girl. They invited us to their home stay where we had lunch with them. It was well deserved beer and lunch. Thanks to the doctors! We managed to get a taxi to get us down to Iskanderkul. We did not want to walk on the road. People were greeting us and they were offering services. The first civilization shock. The second were  mosquitoes, they were very annoying and persistent. We had to get our bags that were transferred from the Alaudin camp. Once we obtained them, we moved to Snake lake. It is above Iskanderkul and it was vacant.

29.7 - The accommodation was OK, we at least had a small tant for all of us where were no mosquitoes. There were too much mosquitoes outside, however the scenery was nice! You can potentially fish there and also swim. We tried local fish but did not like it much (not sufficient portion mainly). Instead of staying one more day or so, we decided to go to mountains again. Mosquitoes were the most decisive factor. We managed to find a taxi to get us at least to the new mine. There is lot of going on because of this mine. Lot of machinery, loaded trucks constatly going. The taxi driver left us close to the mine as the dirty forest road ended there anyway. We started hiking and searching for a camp spot as it was getting late. We found a good place in the meadow. There were couple of rock buildings but no one anywhere. Just us. This is the beginning of our hike to explore Hissar range. I’ll cover this hike in another post.