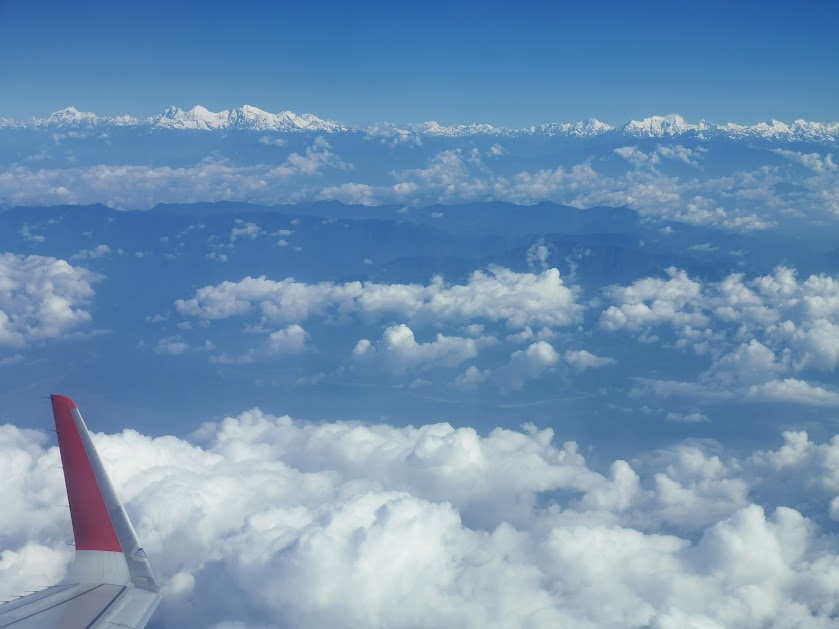 Travelling usually means getting on a train, bus or an occasional plane. Well, not this time. The plane was just the beginning to get to Kathmandu. Thats where it all started. Driving in Kathmandu calls for commando-like survival skills to manoeuvre among legions of motorcycle drivers, who squirm left and right and everywhere to beat the stalled traffic. Local drivers also use the horn as signal of right-of-way. There are no drive-yourself rental cars available in Nepal, but you can easily hire a car or jeep with a driver through a travel agency. We have booked a private car to wait there for us. It took us 10 hours to drive ca. 200km to Chame. As one of the fellow tourist described the traffic “after 2 hours in the car we still weren’t quitee sure which side of the road do Nepali people drive on”. Although it may seem chaotic, this style of driving doesn’t cause conflict or frequent accidents on the roads. Generally, the people remain calm and compassionate – thanks to the Buddhist and Hindu philosophy.

After a couple hours drive, we swapped the car for a jeep in Basisahar (1043m). The jeep is required for the second part of the journey because there is only a narrow dirt road. The weather there makes it difficult to maintain roads in a good shape. If you can, avoid driving on this type of roads during the monsoon season. Rains cause landslides and make driving and using the roads risky and dangerous. The famous “Death Road” in Peru (Yungas Road) could be easily stripped of that title by the road from Basisahar to Chame (2650m) if it was up to me. Chachare Kohl Bridge was the last one we have crossed. For the rest of the way the motto “bridges are overrated” applied. Sometimes I had the feeling that our car remains on the road just by the will power exercised by its passengers. I must admit, the ride was not my cup of tea. On the other hand, Martina enjoyed it, while Juraj even slept through some of the scariest parts. Also, locals don’t seem to mind the roads at all. It’s quite common to see a 5-seater car with 10 passengers.

Unfortunately, we didn’t make it to Chame on that day, as we optimistically planned: a truck got stuck on the road which caused a delay. Therefore we stayed in Dharaphani (1860m) in a regular teahouse. You will get to see many more of them on your trip. However, the beds were damp for some reason, so we slept on the emergency foils - pretty smart idea Juraj came up with. There was also a toilet and shower with “hot” (translate as lukewarm) water. You should be prepared for overpriced tea in all the tea houses. By overpriced I mean that it costs as much as a meal. The next day we continued our drive to Chame, passing though Thanchok and started hiking in Chame. Chame is easy to reach (also by car) from Thanchok.

If you plan a similar trip, we would recommend you to stay in one of the tea houses in Thanchok(2700m) - it’s just a little further up, much less touristy and you get a great view of the Manaslu mountain (8163m), the eight highest mountain in the world. Of course this recomendation is based soleely on the location of the teahouse, we have no idea how the service is. But who comes to nepal for gastronomical experiences after all?