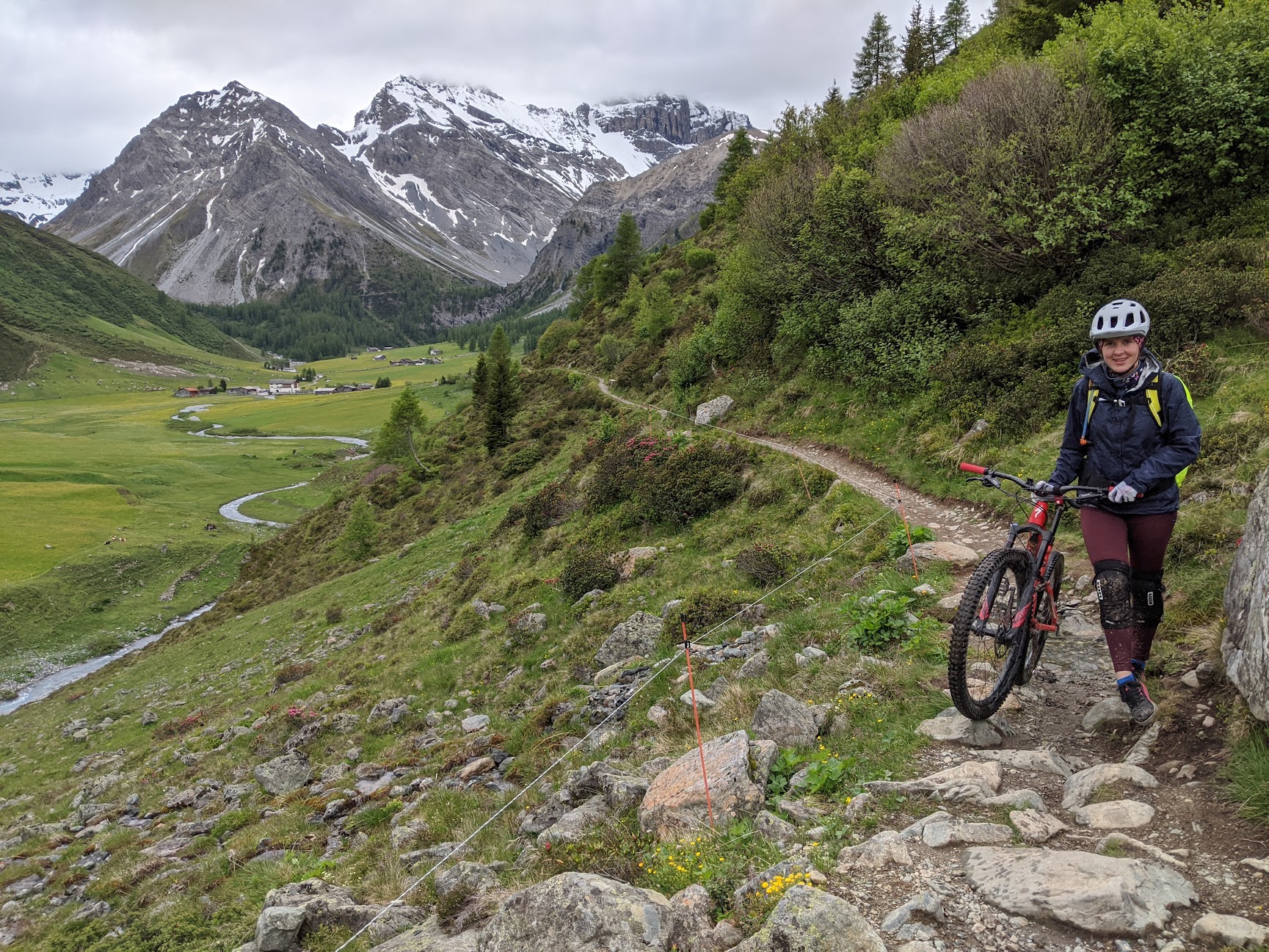 The weekend weather forecast around Munich did not look promising. Most of our friends were out of town as well. Martin got an idea to check the weather further from Munich. Davos looked promising and the accommodation we found earlier this month was also available. Time to visit “Home of trails” region. What a throwback! This is where Martin and I lived together for the first time. Martin came from rainy flat Cambridge and I came from rainy flat Belgium. Hilly, snowy Davos was a very welcome change. I got a research job in Davos at the Snow and Avalanche Research centre. We lived in a small Studio on a farm and would wake up to the rooster in the garden every morning. Not to forget the “homely” smell, which one gets to miss once its gone. Such a different life back then. Everyone who lives there is an outdoor person. Everything evolves around nature, literally everything. “Sorry I am late, I was skitouring” was a valid argument for showing up late to work, especially when the weather was good. The only downside was that I was a full time student at the same time. Yup, along with the full time job, this involved countless sleepless nights. However the Davos lifestyle was worth it. Its like a different universe there.

Anyways, this is also the time when we got into MTB properly. We always used to ride and enjoy the mountains, but Davos brought it to a different level. I used to borrow my brothers hard tail bike from a brand called “cocaine” (yeah, i have never heard of them either). I did love that bike though! Also, I had no idea that the telescopic post was a thing back then. Martin got his first proper MTB bike by the end of our time in Davos and thats when it all started. We found the magic that was hidden below meters of snow - all the single trials. The weirdest thing of all - MTBikers are not frowned upon here. I would even say MTB is encouraged! Obviously this has to do with how the bikers behave. Many riders are locals who are basically riding in their back garden. EVERYONE takes care of the trials and is super respectful. There are no conflicts between hikers and bikers, even though they often share a very narrow path (in both directions!). If something is (rarely) forbidden, everyone follows the rules. Plus, it’s clear which restrictions are actually valid and which are not, unlike in Bavaria. In Bavaria, there is a tendency to put up restriction signs, despite the lack of approval from an authority. But that is a story for another day…

We were staying in Davos Monstein. There is a local brewery with very good beer! Finding trails around here is so simple, which makes choosing which one you want to ride all the more difficult. We made plans to do the Davos epic trail on Saturday and Albula haute route on Sunday.

In the morning, we rode from Monstein down to Calvendel. There is a forest road and it basically leads all the way through Rinerhorn ski resort. In the spirit of “human powered adventures” (and as a matter of habit) we climbed up. The alternative would have been to take a lift, which everyone else did. We were the only poor suckers who decided to climb a 900 vertical meters even before the epic trial officially started. I still loved it! Even though the last section was so steep, that we pushed the bikes. Don’t get me wrong, we did try to cycle up. The problem that we were so slow, that at some point we basically fell to the side. This gave us more time to enjoy the views though. By the time we got to the start of the epic trial, I had the feeling that we deserved it.

The trial itself was almost snow free, except three smaller patches. When Martin did this section two years ago, they had to push their bikes though one large snowfield, which took some time. Despite the good “snowless” condition, I still have managed to faceplant. It was such a perfect act at such a pathetically small patch of snow, that I couldn’t stop myself from laughing…along with 5 other bikers who witnessed this. Other than that, the trail was almost empty. We only met a couple of hikers and bikers. The trial is rated as S1 and leads to Sertig Village.

Sertig valley is a magical place. You can go hiking, climbing, ice-climbing ski-touring and mountain biking here - probably on the same day too! We have been here on a skitour once and have seen a pretty large avalanche. I take the pride on deflowering Martins avalanche virginity, he has never seen one before (and hopefully will never be in one, ever!). Ironically, the avalanche that we have seen was triggered by a guide with 4 guests. Luckily no-one got hurt, but I would have sh*t my pants if I was them.

Back to topic: From Sertig, a singletrail (rated S1) goes up to Rinerhorn. Once we reached Rinerhorn, we took a much needed break. The next trail ahead is 335 Monstein. This part of the day was the hardest. It contains a lot of climbing sections with bigger rocks and wet roots. I am joking about it now that, like a Ferrari, my bike has a low bottom bracket, but I wasn’t laughing much back then. Actually, I was imagining throwing the bike of the cliff in my head over and over. This is because my pedals were constantly hitting the rocks when I would pedal and it was driving me mad! Therefore I pushed most of the section. It got to a point where I renamed the Epic Trial to “Epic Fail”, while Martin tried to keep a safe 5 meters distance from me at all times. But don’t worry, there is actually nothing wrong with the trial. We just learned that the length of the crank arms on my bike doesn’t work for such terrain, and confirmed that patience is not a strong suit of mine. The Oberalp section was closed for now, we had to go around using the official 335 trail. It took us a while to get down to Monstein.

Still pretty mad and blaming Martin for the choosing “epic fail” trial I was determined this was it for today, no more biking. Nonetheless, Martin convinced me to continue to 338 Zügenschlucht. It was supposed to be much easier compared to what we already have done - not to mention the Landschaft there! We left Monstein at about 5 pm. Our goal was to catch the train at 7 pm from Filisur, to be able to have dinner in Davos Monstein (restaurants in Monstein usually cook until 8-9 pm).

The short climb was easy, a forest road. It goes down to Zügenschlucht. The descent down to the george is S0 with some S1 trail parts. There are a lot of train tunnels. The trail leads down to Wiesen train station. From here, the trail continues, following the river. It is quite exposed. Sometimes due to previously washed up parts of the trial or just for being more narrow at some places. We ended at Landwasser Viaduct, not far from Filisur, one short climbing section only. We got to Filisur just before 7 pm, as planned. The train back is worth taking! We went through tunnels we saw earlier and were able to see the george from a different perspective. I was constantly running from one side of the train to the other to see it all. The ride itself takes just 15 minutes to Davos Monstein. We had to prepare ourselves for the last ascent, back to Davos Monstein from the train station - 230 meters ascent at the end of the day. This happens when you start your day with a descent…

Our initial plan was Abula haute route but we had changed it, due to the Landwasser part. We went back to Davos and did the Panorama trail. We have done this before, but in opposite direction. We parked at Davosersee parking lot. It was a pretty good warm up to bike through Davos before reaching the climb. As soon as we turned right after Parsenn lift station, the climbing started. The first half of the climb is easy. However, it starts to be difficult at the middle lift station. There is a gravel road with bigger rocks, which is very steep. Me, as a strong believer of never-push-your-bike, had no choice but to hop off and do the dirty work. It became less steep just below Strela pass, where the Panorama trail starts. Considering that the weather was not great, we were almost the only ones on the trial. The sun came out later in the day. Our original plan was to go to Parsennhütte, but we had to cut it short and descent at Meierhofertäli. Martin’s ankle started to hurt. Meierhofertäli trail is black diamond, rated as S2. I was little concerned it would be too difficult, but it was actually great. So much fun! Martin got a flat tire half way through the descent. Except the flat tire and couple of steep switchbacks with rocks, there was no problems what’s so ever. The trail goes down to the Davosersee.

Pretty happy with how the day turned out, despite the rain in the morning, we were ready to go home. Davos is great, we will be back, hopefully for longer next time!